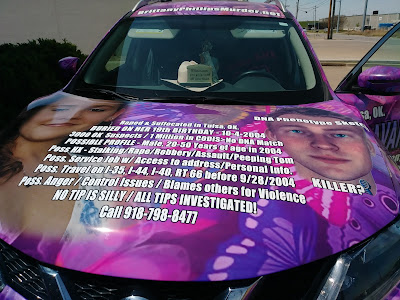 I am on my 16th CARAVAN TO CATCH A KILLER  tour's, currently visiting Odessa, TX. These tours are now my 14 year labor of love in honor of murdered daughter, Brittany Phillips (raped/suffocated Tulsa, OK 2004 --10-4-85 to 10-4-04).  (going to El Paso next)
Tour 16 is the inaugural tour with hood re-wrapped with our new DNA phenotype 3-D image of Brittany's possible killer . Though tours started to:
*help solve her murder
*educate communities about sexual assault/homicide law change
*giving voice to  unsolved homicides across the US
THIS TOUR introduces how  a new forensic tool,  DNA 3-D phenotype image that has given our case new life. Not many PDs are using this yet.  My detective was able to get a grant, submit crime scene DNA to  Parabon Snapshot and within 3 months received an image. Tulsa media coverage of the image generated more than 45 tips in 48 hours
Visiting Odessa/other Texas cities  is important for my 16th road trip, (10 years, 185000 miles thru 48 States with 165 media stories in 48 States in  3 different wrapped SUVs) because Odessa and other Texas cities are connected to Oklahoma through crisscross of our highways and because large Border States with vast wilderness can create refuge for criminals.
CARAVANS were birthed when , regionally in 2007, more than 800 suspects DNA did not match our crime scene DNA (since then 3000 regional suspects & a million in CODIS with no match). Some suggested her killer may have moved on.  I knew I had to get her story beyond OK. Through the unbelievable donation of a wrap to my car (now 3 wraps), CARAVANS BEGAN.
It is my hope, now with an image, as I cover the US again, this picture will increase tips.
In each city, I talk to media, stop by police and Sherriff departments, travel around the city talking to people. Along with topics described above, now in the #METOO era, I am pleading for  # HERTOO-(sexual homicide victims that no longer have voice) to get more attention, especially related to laws.
These 14 years are a labor of love woven through tears . People met at rest stops, hugs given, thumbs up as someone drives by, people sharing prayers from many different religions or a $20 squeezed into my closed fist, all energize me to keep on. Gazing upon Brittany's smile each day as I step into my car, does, at times, have me tell her story through a veil of tears. Yet it warms my heart knowing Brittany, my dancing pony princess, her long blond curls framing her angelic face, and intense dark brown eyes, stares from the sides of my car, in many ways saying "listen to my story, help protect other families from this never ending loss".
﻿
Posted by Maggie at 9:07 PM