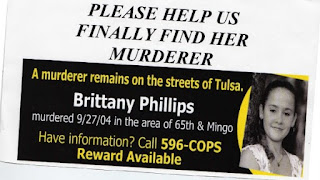 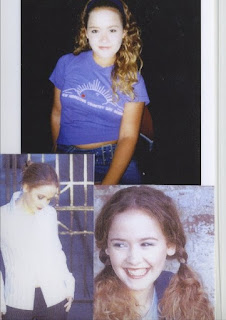 Through the undying efforts of Senator Jolley, Oklahoma's DNA at Arrest Bill SB618 was finally heard in the Public Safety Committee and passed through Committee with a 5/0 vote. Of course the ACLU and opponents started spout myths such as "Now Oklahoma will creqate a data base of innocent people's DNA' That statement by the ACLU shows either no understanding of the process of obtaining and cataloguing DNA or it is the ACLU depending on people not questioning what they say. In other words the ACLU thinks people are not smart enough to question the myths they state.


PLEASE READ OUR "CHANCES ARE YOU WON'T FEAR DNA AT ARREST AFTER READING THIS"  VISIT OUR DNA PAGES OR www.DNAsaves.org or   http://www.denverda.org/DNA/DNA_INDEX.htm  for every fact you want to know.


I have spent 6 of the 8.5 years since my daughter's murder, Brittany Phillips (murdered Tulsa 10/4/04) travelling 67000 miles across 46 states on my CARAVAN TO CATCH A KILLER tours. Most people I talked to didn't understand the DNA process (neither did I once) yet after the news stories, or even after I talked to people on the road, they were going "so why aren't we using it???" when I explained  how only part of the DNA is used, how these peices don't hold genetic codes, how there are safety factors built into the process, how it can't be used to falsely accuse, etc (BTW the ACLU is behind DNA being used to free the innocent but not to protect women and children -with the primary crimes needing DNA to be solved are the violent ones where 90% of the victims are women and 9 % are children). Please email me with your questions, help us educate the community so they can make their own decisions about whether taking DNA invades their privacy  or whether it actually protects it by getting killers off the street early in their carreers not 20 years after killing people. The first year we tried this law in the house Sen. Jolley bloacked it in the senate but then educated himself on it and is now one of its strongest supporters
Posted by Maggie at 7:48 PM